Hello everyone, it’s a busy week on my blog this week! I am truly excited to be joining My Favorite Things this month as a Guest Designer and today I am joining in with MFT & Friends. This day is super fun as not only do the magnificent MFT Design Team share some more inspiration for the new release with you, but several MFT Friends get to join in too! And so, today, I am sharing a shadow box card with you featuring the super cute new set from Stacey Yacula called Piles of Fun.

I thought it would be fun to have these adorable critters jumping for joy in their pile of leaves and have some leaves floating around too – and that is what drove me to making this card as a shadow box. As always, I began by stamping and colouring my images from the set and I also coloured the Birch Tree dienamics. Once I had finished the colouring, I fussy cut the images from the set but there are coordinating dienamics should you prefer.

I then created by box card by taking a couple of panels of MFT Limelight cardstock and trimming them to 4.75″ x 5.5″. I scored each end at 0.5″. I really needed to make this a little smaller as when it folds flat it’s slightly larger than an A2 envelope but hey ho, I’ll adjust the measurements next time! I also cut two struts from the same cardstock (4.75″ x 0.25″) and scored each of those at 0.5″. These will be inserted at the top and the bottom of the card and will allow me to position my birch trees so that they look staggered. While the Gemini Junior was out, I also die cut a rectangle window in the front panel.

Next I created my background by taking a panel of Neenah 80lb and blending Abandoned Coral, Spiced Marmalade, Mustard Seed and Mowed Lawn Distress Inks from top to bottom. I splattered some water droplets on it and picked them up with a paper towel to add a bit more interest and then set this to one side. At this point, I adhered a birch tree to the inked panel as it would be tricky to do later.

To assemble the card, I added DST onto the scored flaps of the main shadow box and also the struts. But before actually removing the backing tape and putting the box together, I adhered the pile of leaves to the back of the opening in the front panel. I also added little strips of acetate onto the two critters and adhered those to the back of the pile so they look like they are jumping around. Then I removed the tape and stuck the box together.

The birch trees were then adhered with wet adhesive – one at the back of the window panel and the other using the top and bottom struts so it sits mid way between the back and front. All that was left for me to do was add in a few more leaves either with acetate strips or wet adhesive. To finish the card I stamped a sentiment from the set onto Black Licorice cardstock using Versamark ink, added white embossing powder and heat set. This was trimmed to fit the width of the box.

That finishes today’s card. Sorry this is such a lengthy post – it is hard to describe making cards like this so I hope it made sense. You definitely need to plan ahead a little but they are really fun to do! I will be back tomorrow with another post for you using another fun set from the new release! Until then, thank you for stopping by! 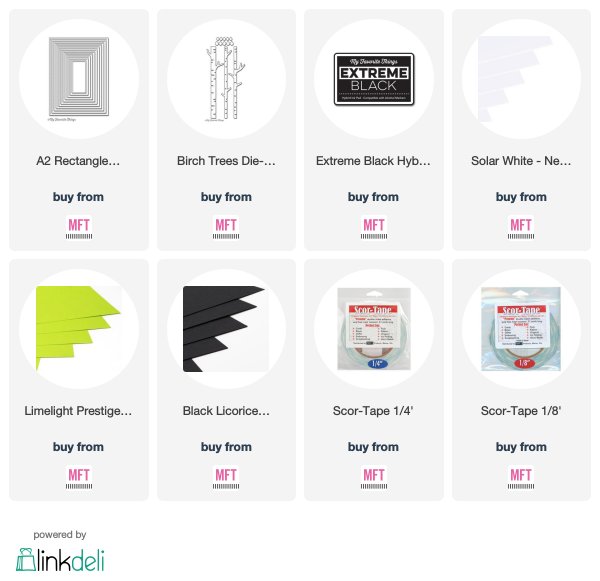 Enter your email address to receive notifications of new posts by email. When subscribing you may need to check your spam folder for the confirmation email in order to complete sign up.